Rights of a Wife in Islam – 6 Islamic Rights Your Husband Won’t Tell You! 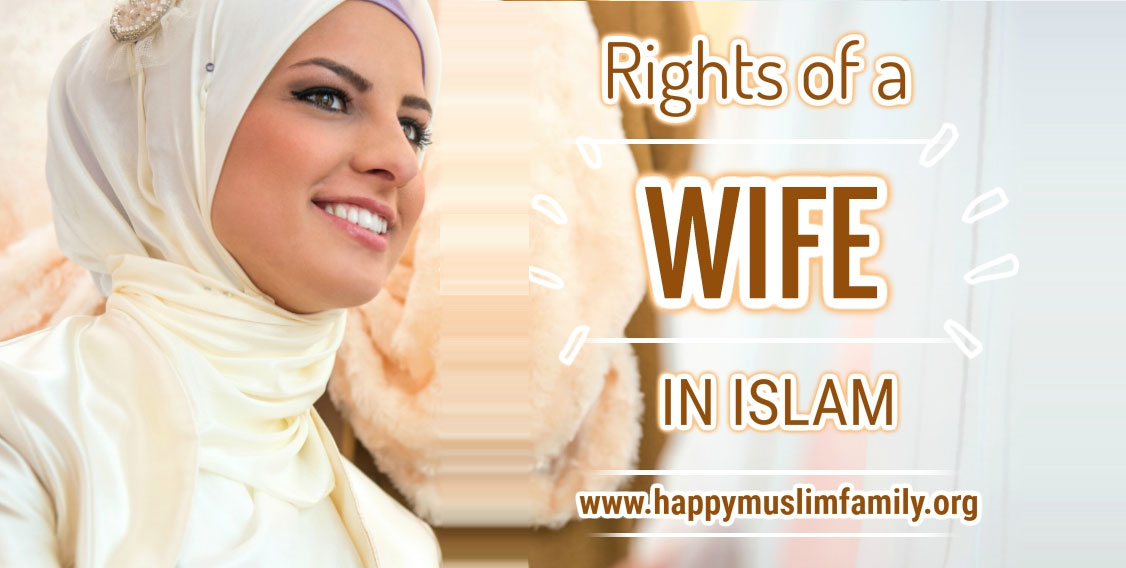 The West might be proud of being the champion of so-called “women rights”, yet Islam protects the rights of a wife in the most beautiful way.

It is easy to think of marriage with a rose-tinted view. As much as the union is one that is firmly rooted in Islamic practice, people do get carried away by the worldly ideals of “love” and “romance” to a point of sometimes being unable to consider practical reality.

Entering into the union of marriage is most definitely a beautiful and sacred act, encouraged by Islam. Yet, to give the solemnity of this happy union its due consideration, it is important to also look at the rights and responsibilities of both parties when it comes to being a spouse.

More specifically, this article takes a look at the rights of a wife in Islam. Yes, unsurprisingly, women are more influential than anticipated. As they embark on a journey towards being a wife in Islam, they hold more rights and personal agency than the secular world would ever imagine.

Though marriage is a happy union sanctioned by the almighty Creator, it helps to go into it, with full knowledge of your rights and duties. Attention all married or soon-to-be-married Muslimahs, this one is for you.

Rights of a Wife in Islam

1. The right to accept a marriage proposal

Narrated by Anas (ra): “A woman came to the Prophet offering herself to him in marriage, saying, “Have you got any interest in me (i.e. would you like to marry me?)” Anas’ daughter said, “How shameless that woman was!” On that Anas said, “She is better than you for, she presented herself to Allah’s Apostle (for marriage).”

At the very outset, a wife in Islam gets to decide if in fact she will be getting married in the first place. Sisters don’t be left in the dark, thinking that you have a lack of personal agency when it comes to choosing the circumstances around your marriage.

There is a common misconception that a woman needs to merely accept any marriage proposal that comes her way. Especially because marriage is a sunnah practice and favoured in Islam. Many ahadith strongly encourage the youth to seek marriage, and the parents to accept proposals from good matches. Yet, the rights of a woman are protected and firmly entrenched in Quran and Sunnah and a woman has the right to accept or reject a proposal of marriage at any offered time. “And give the women [upon marriage] their [bridal] gifts graciously. But if they give up willingly to you anything of it, then take it in satisfaction and ease.” [An-Nisa’: 4]

According to Islamic law, the rights of wife in Islam suggest that women have the right to receive a mahr or bridal gift from their spouses which is normally agreed and decided upon at the stage of negotiating a marriage. It is a symbol of love, honour and intention, and should never be confused with the idea of buying a woman or some type of archaic form of ownership, an act that Islam reviles and dislikes.

Often times, the mahr or bridal gift is a concept that is taken out of context and vilified as an incorrect practice, but in actual fact, it is the right of a married woman to receive one.

The mahr may take the form of money or gifts and goes directly to the wife, not to her family or her parents.  This is usually negotiated in terms of the bride’s expectation before the marriage takes place. Pending a few exceptions, the gift of assets/money/kind is a property for keeping for the wife in Islam.

3. The right to considerate and kind treatment “Allah is pleased when a husband plays with his wife, due to this he fixes thawaab (good reward) for them or he establishes halal rizq (lawful sustenance) for them.” [Hadith]

Other than financial sensibilities and the act of marriage itself, there is one simple fundamental right that a woman has in marriage and that is the right to kind and considerate treatment.

Kindness is due to a woman as a wife in Islam in a number of ways. For example, a husband should never travel thus leaving his wife unattended for longer than four months. Umar Ibn Al –Khattab (RA) one of Islam’s greatest caliphs once related that a decent space of time to be absent from one’s wife, if tied up on unavoidable matters, was four months.

Also, the wife is expected to put her best foot forward when it comes to grooming and beautifying her physical appearance for her husband. A man needs to be kind and considerate enough to give a woman the time and space to do so, in addition to grooming himself.

Even when it comes down to household chores and embracing her husband’s family, the woman, as the wife in Islam, has the right to ease into this slowly, instead of being forced to do so by her husband. Listen to brother Nouman Ali Khan’s take on this in the video below!

During the Gulf Tour 2015, a non-Muslim sister, who was potentially looking to accept Islam, asked brother Nouman Ali Khan a question about the rights of a wife in Islam. Brother Nouman gave an awesome reply with some very valid points. Watch the video of the reply below:

The Prophet (sallallahu alaihe wasallam) stated, ” A person who after having intercourse with his spouse, reveals their secrecy, will be in the lowest rank on the day of Judgement in the eyes of Allah.”

There should most definitely be the unbreakable bond of privacy in a marriage. This extends to secrets and confidences shared and any subjects that relate to intimacy between couples. In the era of social media being what it is, couples should take extra care not to go to public platforms and air the so-called ‘dirty laundry’ after fights and arguments.

Especially when it comes to a woman, Islam strictly dislikes revealing her private matters out in the open. In fact, such behaviour ends up alienating the rights of wife in Islam.  Choose instead to address those issues with the person in question. The person who has been there with you all along; your own spouse!

5. The right to a peaceful home environment “The most complete believers are those with the best characters, and the best of you are those who are best to their womenfolk.” [Tirmidhi #1162 & Ibn Hibbaan]

A wife in Islam has the inarguable right to a peaceful home environment and life. She deserves to have her basic needs met but also to have her sins covered and minor transgressions forgiven.

Men are traditionally and Islamically entrusted with the responsibility of being an “ameer” (custodian) of the household. A man’s responsibility in this sense is inexorably linked to that of the woman’s in a Muslim marriage. This isn’t something that ought to be exploited, but rather an extra factor that a man should be considerate of in his treatment of his wife.

6. The right to financial support

“But the father of the child shall bear the cost of the mother’s food and clothing on a reasonable basis” [al-Baqarah 2:233]

Evidences from the Quran and Sunnah clearly stipulate that a wife in Islam is entitled to financial upkeep and maintenance.  This includes food, clothes, a degree of money and funds that will help her not just maintain herself but her children and home.

On the other hand, the Western ideology encourages women to take a more ‘independent’ approach financially. While doing so may be fantastic for a woman’s own personal or career development, it does also detract from her right to enjoy the protection and support of her spouse. In Islam, husbands have actually been preordained as the protectors and maintainers of women.

There are many aspects to consider before getting married and one of the greatest realisations that everybody will eventually come to is that companionship, under the halaal label of marriage, is something that deep down we know we all crave.

Taking the decision to getting married, is merely the first step in the journey and one has to keep updating their knowledge, especially from a sister’s perspective. Marriage is one of Islam’s greatest institutions that will help us grow our lives into the greatest assets that we have.

In our discussion forum, many sisters complained they are always being told about the duties of a wife in Islam. So they asked me to shed light on their Islamic rights as a wife that led me to write this article.

I hope this helps you as a Muslim wife understand your Islamic rights. At the same time, I don’t want this article to become a tool in your hands to be used to emotionally torture your husband every now and then. So please sisters, don’t do that.

If hope you enjoyed the blog post. If you think this post will benefit other sisters in your community, your friends or family, then do them a favour and share this article with them.

Just click the Facebook/Twitter icons below and help other sisters know their Islamic rights as a wife. Come on, take your share in the ajar by sharing the article.

Also I look forward to listening to your take on the topic in the comments section below. What do you think about the rights of a wife in Islam? I am all ears to you. 🙂